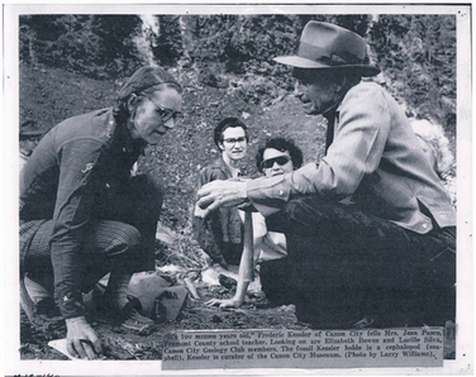 Professor Kessler, a high school American History teacher with students.
CCGC History
by James Meacham & Cindy Smith
The first meeting of the Canon City Geology Club took place in the high school on Main Street in 1927. R.W. “Bill” Biggart, a boy from Oklahoma, was visiting his aunt and attending high school here in the meantime.

Bill wrote an essay based on the geology of the Royal Gorge area which was so impressive that it was passed from teacher to teacher. When it came to the history teacher, the essay was studied carefully and the club was formed with Billie Lindsey as President and Bill as field trip chairman.

Early Field Trip
The club went out on weekends and collected rocks and fossils found on the mountains, some of which are in use now in a geologic display in the east wing of the Municipal Museum. These were arranged according to the U.S. Geological Survey made by F.V. Hayden in 1870, which states that nearly every formation in the geological scale outcrops here in the rock occurrences near the Royal Gorge.

Through use of the Hayden survey, the club learned that the first complete dinosaur remains known to science were discovered in Garden Park by Professor Marsh of Yale University and Professor Cope of the Philadelphia Academy of Sciences.

Then the club began to hunt for the excavations made by those noted men. Four or five of the places were discovered and a stone monument has been erected on the highway near the Frank Dilley ranch to indicate the approximate area where the discoveries were made.

While searching for these historic excavations, the members of the club found indication of dinosaur bones that had not been found by the experts of other expeditions. After some digging by the school boys, the men from the Museum of Natural History in Denver were called for advice on taking up the specimen, which proved to be a Stegosaurus type of dinosaur, the kind with large armor plates on their backs. It is now on display in the Denver museum, labeled “from Fremont County”.

In 1941 and 1942, a convention of geology club members was called to meet in Denver. Four clubs were represented as follows: Canon City; Phoenix, AZ; Salt Lake City; Gunnison, CO; and the Fisher Club near Gunnison. Dale Flaherty and F.C. Kessler represented Canon City. The result of the convention was the organization of the Rocky Mt. Federation of Mineralogical Societies. The Federation has grown since then, and the membership has incorporated the mineral collectors in nine states.

In 1952, the Federation Convention was held in Canon City, at which thousands of rock collectors and geologists were present.

About this time, Dan Flaherty began teaching a course in lapidary work on North Fifteenth Street. The saving and polishing of gem stones and making of jewelry was more interesting to adults than it was to high school students, so the membership changed to adults and the place of club meeting from the high school to the Women’s Club Room in the Municipal Building. The membership now is about 50 or 60.

Space doesn’t permit to name all members who have been helpful in club work, however the late Mrs. Maud Paulsen was President for many years; Mr. William Weaver, who did the masonry work in the fireplace in the Fourmile Community House. The rocks were furnished by the club members and laid according to their geologic age. Then Richard Buhlis who has provided many dollars worth of gem stones for prizes. Dr. Heinz Eckert of Florence who was influential in getting the Rocky Mountain Federation Convention in 1952. Then the excellent summer programs given by the geology professors and students from the geology field camps who came here from neighboring states for field work every year.

While we know Professor Kessler was the first secretary of our club and that the club’s meetings were held in the basement of the Municipal Building along with the three women’s clubs, sadly much of our rich history appears lost as records from our inception until 1973 are missing.  We hope one day to have a location to display some of the outstanding mineral and fossil specimens found in Fremont County.

Canon City Geology Club (CCGC) was the first geology club in Colorado to be a member of the American Federation of Mineralogical Society and one of the first four geology clubs west of the Mississippi.  With a long and proud history, CCGC today has over 60 members who enjoy robust monthly meetings with interesting speakers and the opportunity to participate in a variety of field trips with surrounding geology clubs.

Professor Kessler, a high school American History teacher and curator of the Cañon City Municipal Museum until his death in 1963 at age 79, reached out to students and the community, sharing his passion for the outdoors.  His discovery in 1937 of the second stegosaurus in Garden Park led to it being named as the Colorado State Fossil in 1982.  Today most of that stegosaurus roars daily at the Denver Museum of Nature and Science.

We would also like to collect other information and memories of CCGC's history.  If you remember a special event or have old documents and pictures about CCGC, please email me at: ccgeologyclub@gmail.com 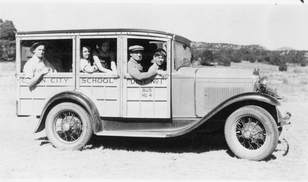