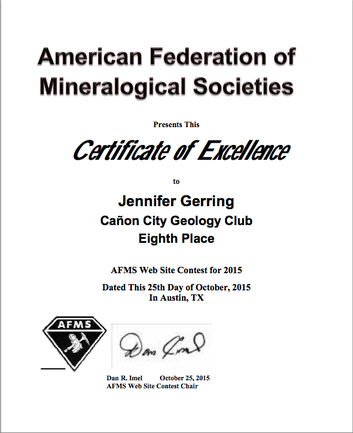 First I would like to say “Thank You!” to ALL of the RMFMS club web masters! Thank you for the service and for the information you provide on behalf of your clubs and the greater rockhound community.

This year we had 6 entries to the RMFMS Web Contest. Competition was tight, but after weeks of pouring over the sites, these winners were chosen:

These 3 winners have now been submitted the AFMS Web Contest. The winners of that completion will be announced at the AFMS convention in October.

On May 11, Keith Krugh, Plant Manager of Holcim (US) Inc., Portland Plant in Florence, Colorado, gave a new projector to Cañon City Geology Club for presenting their programs and other events. This generous gift came from Holcim's community grant program.
Holcim supports many local events in the communities they serve. Holcim (US) Inc. is one of the largest manufacturers and suppliers of cement and mineral components in the United States.   http://www.holcim.us/ 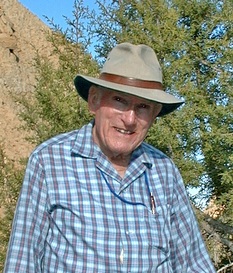 Dr. W.A. "Bill" Cobban, one of the most highly respected and published geologist/paleontologists of all time, passed away peacefully in his sleep in the morning of April 21, 2015 at the age of 98 in Lakewood, Colorado. Bill was an extraordinary geologist, field collector, biostratigrapher and paleontologist who spent nearly his entire career working for one of the oldest and most respected US government institutions, the US Geological Survey (USGS). In a career that spanned more than 70 years he fundamentally changed our understanding of the Upper Cretaceous Western Interior geology through its fossils and made it explicable, logical and comprehensible.

Dr. Cobban was born in Anaconda, Montana, in 1916. He attended the University of Montana in Missoula and in 1940 went to work for Carter Oil Company (now Exxon) as a geologist, stratigrapher and mapmaker. In 1946, Bill attended Johns Hopkins University receiving his PhD in 1949. He began his USGS career in 1948 with fieldwork on the Cretaceous deposits of southeastern Montana and northwestern South Dakota.

During his years at the USGS, Bill mentored under John B. Reeside, Jr., the father of modern Western Interior biostratigraphy, and collected and published with close friends and colleagues James Gill and Glenn Scott. These geologists spent most of their careers collecting, mapping and publishing on the geology, stratigraphy and the invertebrate fauna of the Western Interior Upper Cretaceous marine sediments. The collections that these geologists assembled are unequaled anywhere and their research refined our ideas of biostratigraphy within the marine Western Interior. Throughout the last 70+ years, Bill also collaborated with dozens of other respected geologists and paleontologists worldwide.

During his career, Dr. Cobban visited and collected more Cretaceous outcrops than any othergeologist. From his records he created a USGS database that contains 14,000 Mesozoic mollusk localities from the Western Interior alone, not to mention the untold dozens of other localities he visited in the southern, southeastern and eastern United States. At every locality, Bill took measurements (whenever possible), collected fossils and made impeccable notes. His publications show his uncanny abilities of observation, interpretation and deduction. Bill has shared his knowledge with all those around him and with all those who visited him at Denver or accompanied him in the field.

Dr. Cobban is responsible for naming and defining most of the 71 Upper Cretaceous ammonite zones of the Western Interior. Along with colleague John Obradovich, he was able to assign the most accurate and accepted argon/argon dating to most of the Upper Cretaceous bentonite layers. These zones and their corresponding ages are recognized and used by geologists worldwide as the standard for Upper Cretaceous zonation of the US Western Interior. Bill was involved in the systematic descriptions of hundreds of invertebrate fossils naming at least 35 genera, 2 subgenera, 215 species, and 11 varieties of ammonites along with 18 species of inoceramids. Bill was a disciplined researcher who authored and co-authored more than 330 papers on the invertebrates, biostratigraphy and geology of the North American Late Cretaceous. He continued to publish nearly up to the time of his death.

Bill was preceded in death by his sister Ruth Johnson, his wife of 75 years Ruth, and grandson Colt Baird. He is survived by his daughter Georgina Egbert, sons Robert and Bill, and by hundreds of close friends and colleagues who were fortunate to have gotten to know him.

Dr. Cobban will be remembered through his many publications and dearly remembered by each and everyone who had the opportunity to visit this great man and the collections he helped acquire, now housed at the Denver Federal Center Building 810. He left this world a much better place and all who knew him were enriched by his friendship and knowledge

AFMS Club Rockhounds of the Year - Daniel and Cynthia Nichols 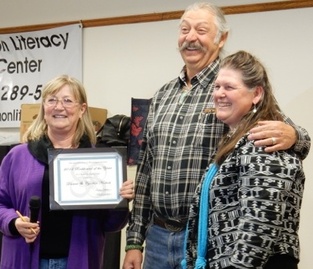 This duo is always warm and welcoming to new members and beginning rockhounders.  They are willing to share their knowledge and expertise as well as their finds.

When asked to help with club activities, they jump right in without hesitation, whether it be moving chairs and tables or giving a demonstration.  They have been active members for over 10 years.  They have collected most of their lives, traveling all over the United States and internationally collecting rock, gems and minerals of all kinds, “even ugly stones, because they all have a purpose”, says Daniel.  Their show and tell table is always a favorite and their lapidary work is exquisite.

Go to American Federation of Mineralogical Societies Newsletters on their website for this article. Select the February 2015 newsletter. 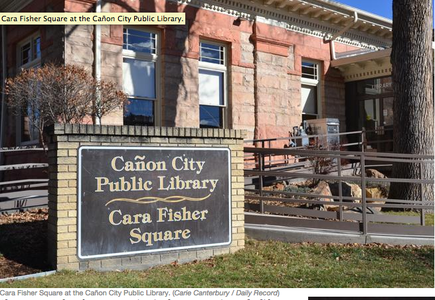 She was a catalyst for preservation in the community and a life-long learner and teacher.

Local artist, historian and author Cara Fisher, 90, died Tuesday (2/10/15) morning after an illness in Colorado Springs, but she has left her footprint on Cañon City that will live on.

Sue Cochran, assistant archivist of the Royal Gorge Regional Museum & History Center, said history and historic preservation have suffered a devastating loss with the death of Cara Fisher. "She was the most enthusiastic cheerleader I have known when local history was at stake," she said Wednesday. "We will miss her. Her buildings will miss her. Who can possibly fill those tiny but determined shoes?"

Fisher was born in New York and grew up in St. Louis, Mo., where she later studied art at the Washington University School of Fine Art. She moved from Westcliffe to Cañon City in 1971.

Her love for art quickly became evident when her artwork was displayed as a "one-woman art show" at St. Thomas More Hospital in 1973. Fisher and co-owner Kathryn Adams opened the Artworks in 1977, an art gallery that provided business space for artists, workshops and classes at 118 N. Third St. It housed art pieces from more than 100 artists. It was lost by arson in December 1980. A 13-year-old juvenile later was found guilty of arson, burglary and theft.

Fisher illustrated Elinor McGinn's book, "If Walls Could Speak," a guide to local history and published by the Fremont-Custer Historical Society, in 1984. Two years later, she was hired as curator and director of the Local History Center in the basement of the Cañon City Public Library. Visits and research requests at the center increased from 295 in 1987 to 2,870 in 1999.

She was presented with the Doc Little Memorial Award in 1995, was named Distinguished Citizen of the Year in 1998 by the Fremont County Community Access Channel 19 and was grand marshal for the 1997 Cañon City Music & Blossom Festival.

Fisher went to college when she was 50, majoring in art at the University of Southern Colorado, where she earned a degree in secondary art education. She also was given the Colorado State Honor Award in 2001 by Colorado Preservation Inc., the same year she retired from the Local History Center and the library park officially was named "Cara Fisher Square."

She wrote grants for Main Street USA to help preserve historical buildings, and in 2002, Fisher was named Citizen of the Year by the Cañon City Elks No. 610 for her help in garnering grant dollars from the Colorado Historical Society. She was instrumental in the formation of the Fremont County Heritage Commission and was a recipient of the 2011 State Honor Award, for a second time.

Fisher got Carol McNew involved with the Greenwood Cemetery Committee when she was forming it in 2000. "She was instrumental in getting that committee started and nurtured, and was a driving force for quite a few years," McNew said. "...We all feel like it is a great loss for the community, and the more we learn about what she was involved with, the more we will realize that Cara is going to be very much missed."

Close friend Mary Chamberlain said Fisher pushed her, as well as everyone, to "get things done." "She was always excited to see things happening," she said. "...She was so important to this community."

Fisher is survived by her daughter, Mary Ann Donovan. She was preceded in death by her husband, Elmer Fisher, and son, Timothy Donovan. Chamberlain said a service likely will be scheduled in March, possibly at Cara Fisher Square and Macon Plaza.

In an article printed in a 2001 edition of the Canyon Current, Fisher noted that someday a future director of the history center may wonder for whom Cara Fisher Square is named.   "That's the way history is," Fisher was quoted in the article. "It goes on." 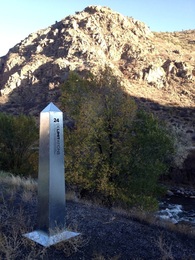 From Texas to California - including Colorado,  a public art project called Delimations was installed in mid-July that traces the 1821 US/Mexico Boundary. There are 47 delineation markers in all stretching from the Gulf of Mexico in Texas to the Pacific Ocean in northern California.
These markers look like small obelisk made of steel.  There are several across Colorado, 4 of which are in the area; 1 in Canon City, 2 in Lake County, and 1 in  Cotopaxi.